Everyone needs a tribe and The Tribe needs people. Join the Tribe!
Contact us at tribegvg@gmail.com or 0401 077 210, and don’t forget to like us on

for all the latest tribe team updates.

history of the tribe

The ‘Teachers Team’, (later renamed, ‘The Tribe’) was one of the original eight teams when the Games began in 1988.

Nadia Taylor, who is still a local resident of Greenwich and now in her 80’s, led ”The Teachers Team’, for the first two Greenwich Village Games in 1988 and 1992. An enthusiastic teacher, she recalls how this concept of gathering the community together for one weekend in December, just exploded into this amazing, fun event.

“No one could really do anything…. people couldn’t swim, but they still had a go in the pool. Every sport was represented in different ways. We would practice in the park, before the big day, eyeing up the opposition, practising at the other end of the park! It brought the whole community together in such a special way!”

Another local ‘Teachers’ resident, Judy McMahon, remembers screen printing the team’s T-shirts in the Lawson’s kitchen and revues that often had one member of the team on stage, entertaining the crowds alone, as no one wanted to perform in those days! 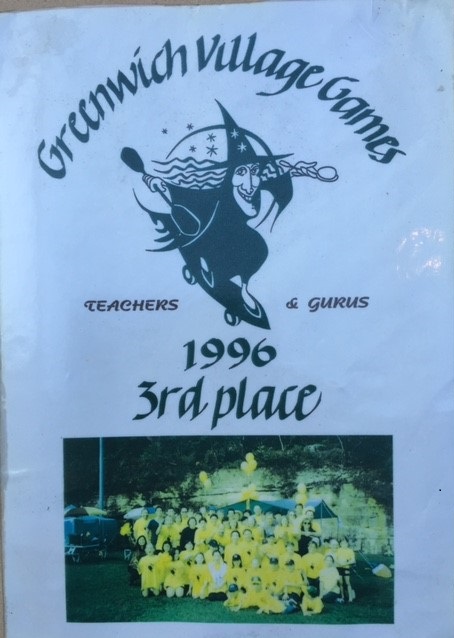 Since Nadia’s leadership, there have been a number of Team Captains, Glenda Cameron-Strange from 1996 until 2004; Jenni Bittar, co-captaining in 2000, both local teachers at Greenwich School, Karen and Hugh Chisholm from 2008 and 2012.

In the Year 2000, ‘The Teachers Tribe’ renamed themselves ‘The Tribe’, a name which the team believed was representative of their members coming from many different backgrounds, professions and walks of life.

From fifty team members in 1988 to over one hundred and fifty seven in 2012, ‘The Tribe’ lives on in the spirit of community involvement and the competitiveness of The Greenwich Village Games.